So as you’ve seen from my battle report pictures I currently use a set of wooden discs, hearts, and stars to mark the figures with various status effects, like Moved, Fleeing, Panic, etc. Yesterday’s report had some good examples of these. Well I was thinking of improving the existing tokens a bit, like painting the Fleeing/Panic hearts red, the Reload stars yellow, and writing “Moved” and “Moved & Acted” on the round circles after painting them some color (probably blue).
And then I remembered Litko (after feebly searching for “Lithko” for far too long). They have a huge selection of plastic tokens. I had looked at them in the past for torpedoes for Silent Death, but never ended up buying anything.
Anyway they have the terrific option of ordering custom tokens. You can choose the plastic color and type (opaque, transparent, etc.) and shape (star, round, etc.) and then have custom text written on them (up to 12 characters long). The price is great too, as you can get 10 custom text tokens for $6.99 + shipping (which looked pretty cheap up to the frozen Canadian north).
So I thought I’d link and show some of the tokens and markers I’d be interested in getting. First of all the premade tokens:

Token: Reload
For reloading I have a few options. I could just get a custom token or two, but they also have a great set of bullets and empty magazines. I’d tend towards the magazines since they have the word Reload on them and are slightly less “gunpowder-centric”. 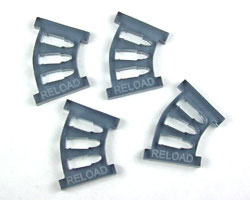 Bullet Counter | Magazine Counter Token: Force Fields!
There totally aren’t shields or force fields in Dinosaur Cowboys, but these tokens honestly make me want to add them, haha. They’d be great for a one off scenario or for protecting an objective or something, since figures hiding behind them would look pretty neato. 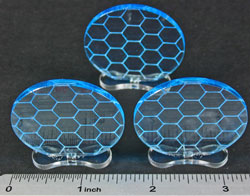 Force Field Custom Token: Acted, Moved & Acted
So far I’ve been using the same wooden circular disk for both Acted and Moved & Acted, and just sort of remembering who actually moved or not. But Litko has some great shapes that would really help players see who has done what. First of all the general colors and shapes available:

So for Acted I think I would use “Circle” in Fluorescent Blue with the text “Acted” on it. Then for Moved & Acted I’d still use Fluorescent Blue but with the “Circle Arrow” shape, since the embedded arrow would help visually clue players into the fact that movement was involved. I think to be on the safe side I’d get 20 of each.

Custom Token: Fleeing and Panic
I like the fluorescent colors and think they’d really stand out on the table, so I’d stick with Fluorescent Pink with the Heart shape for Fleeing and Panic tokens. 10 with the text “Panic” and 10 with the text “Fleeing” would work well. Too bad they can’t be double sided so I could just get 10 with one word on each side. Custom Token: Stunned, Stopped, Slowed
I wouldn’t need too many of these tokens, so I think I’d use Litko’s Custom 20 option, where you can get 20 individual tokens. It’s a bit pricier (because it’s such a small run of tokens, and it’s probably popular so it’s an easy way to make money for them). There are a few more shapes available for these ones, which is nice:

For these I think I’d get all Fluorescent Orange (again to keep the color theme) with different shapes for each condition. Stopped would probably be the “Gear” shape. Stunned would be “Burst”, and Slowed would be “Splat”. Either that or just all “Burst” shape, but I think being able to visually tell them apart would help.
Anyway I’d grab 5 of each condition, which leaves me with 5 custom tokens. One option for the leftover 5 tokens is to get a test run of each of my custom token plans above, instead of just blindly ordering 10+ of each. Otherwise there aren’t anymore required tokens for Dinosaur Cowboys, so maybe I’d just make something saying “Objective” or red skulls saying “Taken Out of Action”.

Conclusion
So these look like a terrific option to really class up the look of my games. I’ll be placing an order sometime this week I think, and I’ll be sure to post some pictures of the tokens in use once they arrive.