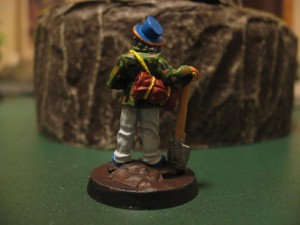 Well I guess he’s arguably just a dude with a shovel, and missing the telltale pickaxe of a Prospector, but I’m still going to consider him one. I’ve had this mini for a long, long while, so I don’t remember what line he’s from or what his original name is. But he’s nicely detailed and has a good mix of old fashion and new equipment (like his sleeping bag roll which looks kinda modern).
Aside from his tophat and AWESOME beard, I kind of got a Rambo (as in First Blood era, not the later stuff) vibe from him. Maybe it’s the sleeping bag slung over the shoulder (pictured right), or the fact that both of them seem a bit troubled. But either way I decided to paint the Prospector’s jacket in old fashion military camo. I also resisted the temptation to put blood on the tip of the shovel, so he’s a great stand in if I need civilians at some point.
As I’ve mentioned before sometimes I get tired of muted colors and brown + black + metal that make up most minis, so as usual I went for some needlessly bright choices. Like his awesome blue velvet tophat (ringed in orange) to match his blue suede shoes.
All in all I’m very happy with the result, and he’s quite striking on the table.

You can see more of the Prospector in the Fight for the Flaming Gorge battle report.