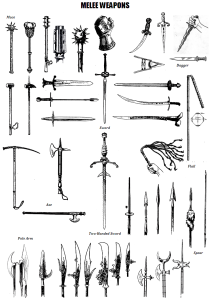 Well after the grand overhaul of range weapons the last couple of days, I sat down and brought melee weapons in line too. More variety (well, not quite to the medieval list pictured right), better prices, bigger selection, and a few new weapon abilities unique to close combat.

Also I used some of the new special abilities for range weapons to make new close weapons, like the Energy Sword which uses Power Settings.

Now we’ve come a long way from knife + broken bottle + hatchet (aka the only close combat weapons real wild west cowboys used), but variety is the spice of life, and it’s fun to have some sci-fi stuff going on. Also if you have trouble visualizing a Duster wielding an Energy Sword, just think of some Neotechnoist in his high tech armor riding out through The Wall mounted on a custom breed of dinosaur, with bright banners everywhere and gun bearers scurrying behind. Besides…it’s fun!

Anyway here is the PDF snippet of the new close combat weapons. These will be in the upcoming v2.5 release of the main rulebook.

I have another Battle to Seattle game tonight, set in Death Valley. Should be a grand old time! I’ll post some pictures asap. Also we are having a “bonus game” this Saturday, which is a pleasant surprise. It will be at the race track in Pahrump (east of Death Valley), which of course will be ruined.