I’ve been ruminating on a few game design thoughts for a bit, as I tend to do when I haven’t tweaked Dinosaur Cowboys in a while. Those creative energies have to go somewhere! Then I realized I had a few topics I wanted to talk about, so I figured I’d make some posts covering each.

Melee and a Vikings Game Idea
For the past week I’ve been considering a skirmish game that focuses on melee. Yes it’s tempting to make a modern military style game (I’d love to capture the tense firefights of Black Hawk Down, and have wanted to for a while). But I also want to try my hand at swords, axes, and spears. For whatever reason Vikings seem like a natural fit.
I did make fantasy medieval RPGs when I was a kid. So it’d be a fun exercise to try to apply my skirmish knowledge from Dinosaur Cowboys to the medieval melee arena.
And although I don’t think it’d be a good fit for a hypothetical Viking game, I do want to make an asymmetrical wargame sometime soon here. I’m sure I could shoehorn it in with Vikings (one side plays villagers who focus on healing, surviving, and win by that, compared to Vikings who go for kills and destruction) but I don’t think it’d be a great fit. I just like the idea of drastically different (but balanced) sides. Space Hulk was one of the best for that, and in fact I ended up getting a 1st edition copy off Ebay partially for that reason.

There is one glaring problem though: melee is boring. I touched on this concept briefly before at the bottom of my last game design post.

Basically movement and positioning around the table (especially with cover, line-of-sight blocking obstacles, flanking and facing, etc.) is a lot of fun, and very thought provoking. You can see the skill of a player come through. Even firing ranged weapons can similarly have the same level of depth and player choice, as you try to get elevation on the target, shoot at someone out of cover, choose the right weapon for the job, find the best target with the best odds, etc.
But melee has none of that. Most close combat systems have two or more people standing adjacent and just wailing on each other. A lot of the time it’s just a big group in the middle of the table (especially without objectives or a reason to split up). Strangely enough a lot of systems resolve those melees entirely differently than shooting, like having BOTH sides attack, when the same game might have no concept of a return fire on ranged attacks. Other systems have locked close combat, so once you’re in you can’t leave. Others have melee take FOREVER until it’s a giant bog of soldiers. Once you’re in melee there is no more movement or positioning, so it can sometime devolve into a fancy roll off. 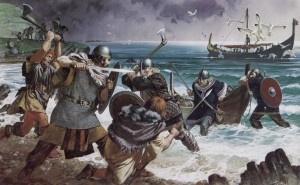 If I was to make a Viking themed, melee focused skirmish game I’d really have to think about how to avoid this problem. My ideal melee system would look something like this:

I think Dinosaur Cowboys covers the first two points well enough, unless maybe a huge dinosaur is involved to wreck the first point. So I imagine I could solve those same problems with Vikings.

So the real question is #3, how to give players meaningful choices beyond “figure out what you need to roll and do it”.

I kind of like the idea of Shields playing a big part, and almost making a bluffing “minigame” out of that. Maybe the defender with his Shield chooses a 1-6 number to block or parry, but has to say low (1-3) or high (4-6) block. This could represent the Shield being leveraged to cover a certain part of the body. Then the attacker could declare the style of their attack routine by choosing a number they’re aiming for when they roll. This would represent maybe an overhand chop (6), to going for the legs (1-2), maybe coming in for the ribcage (3), etc.
Likely none of that was clear. But I think the key to having an interesting melee is removing some abstraction. Instead of just two people hitting each other with swords, get into choosing attack/defense patterns, bluffing, looking for hints in the enemy’s posture, etc. Maybe there is already a game concept out there which executes this idea, but something like translating the art of fencing to a dice/card/resolution system.