I recently played a game using the new Deployment, Objective, and Feature rules. We had a “Clever Girl” deployment with an “Assassination” objective. The Clever Girl deployment is supposed to mimic the namesake situation in Jurassic Park. So the defender has to split their posse and deploy between the back and middle of the board. Then attacker deploys at the back and puts two entities to either flank of the defender’s forward element (ie: the flanking Velociraptors from the movie). This was already a fun deployment, but the Assassination objective meant the defender (who had unknowingly exposed their Leader as a forward element) was immediately on their toes. The game looked like it’d be over in a few turns as the defender’s Leader was down to 2 HP! But they managed to get into cover and push back with the rest of their force, eventually driving the attacker back and winning the game. Quite a good time.

Anyway during this game we also had planned to use the “Carnivorous Plants” setup Feature, which basically meant vegetation could attack people standing beside it. However I forgot to use this rule the entire game.
So what I decided to do to is create a quick Custom Game Sheet. The purpose of this is to help remember what Variant Rules and Features are used in the heat of a battle. Silent Death had a similar approach, and with the growing number of Variant Rules and massive number of Features I figured such a tool would be very handy. So I made a one page sheet and inserted it in the latest rulebook (which I’ll release after some more testing and editing of the campaign rules).

Here is how it looks: 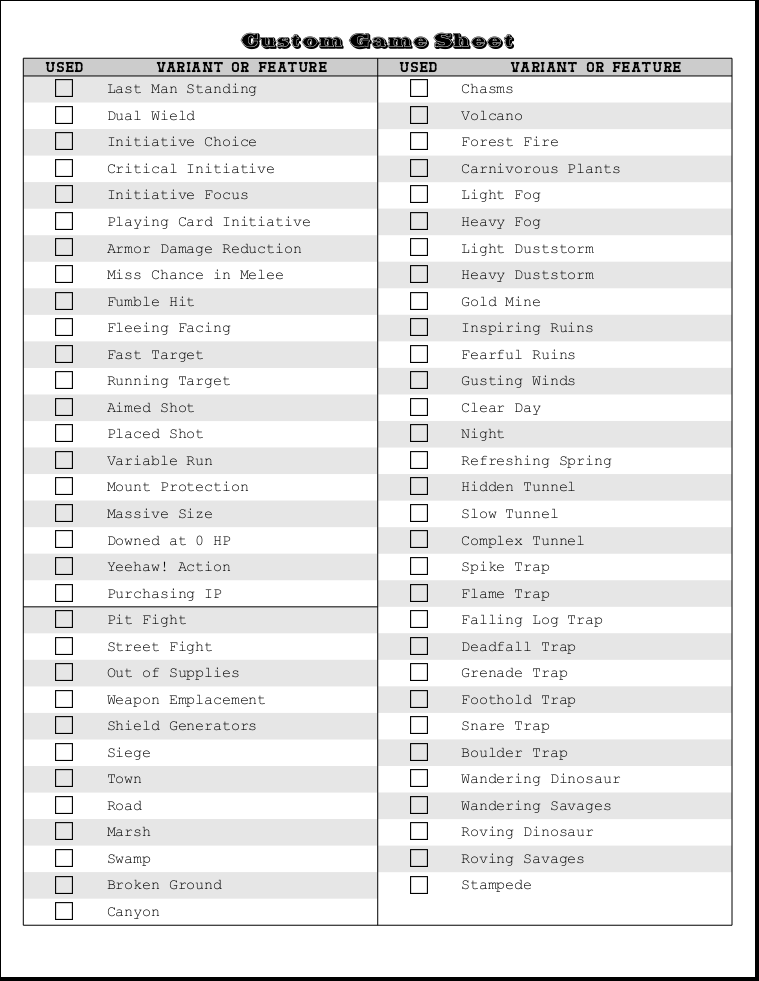 And here is the download: Custom Game Sheet (PDF).

I also added alternating shading to the various item charts. I am honestly not sure why I didn’t have that right from the start. Reading wide tables without any color differentiation is rather tough. I also added a splash of green color to match the blank posse roster. Anyway a quick preview of the old vs new chart:

Now that I looked at the lists from this view I realized the name should have a trailing space or padding to break it up a bit from the divider.

I’m busy travelling for a while here, but I do want to sit down and play some campaign battles for my test Windy River setup.