G.A.S.L.I.G.H.T.
I thought I’d mention two rulesets that sometimes end up including Dinosaurs. The first is G.A.S.L.I.G.H.T. which is terrible to type, and has sort of a goofy looking website, but is definitely a labor of love and quite a cult classic. I wanted to share a bunch of pictures from the Boardgamegeek gallery, pretty much all from the user Yugblad. Pretty awesome looking games going on. Definitely a Victorian flair, since the game focuses on that era, but yeah, looks like a fun time. 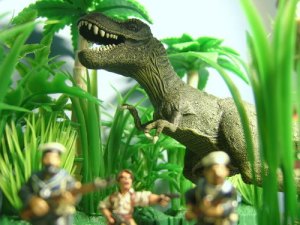 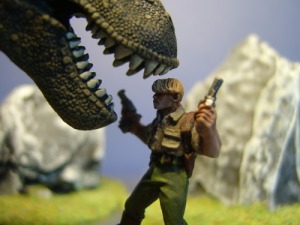 The porter carrying the ivory tusk and running from the dinosaur reminded me of Kwabena from my Windy River test campaign. Also it makes me want to get a few porter figures, most likely these three 28mm porters from Reapermini. I don’t really have any non-combatant figures, so that’d be an interesting change.

Pulp Alley
The second ruleset is Pulp Alley, which is a bit smaller and looks to be focused a bit more on gumshoes and the Indiana Jones style of gaming (and that era). The official site has a Pulp Alley battle report forum with plenty of cool games. I thought I’d focus specifically on Dinosaur Plateau, a battle report that had some good pictures that I’d duplicated below. In general the reports (especially from the game designer) seem to have really great, imaginative terrain. Makes me wish I had some of those adobe houses.