Finally I started brainstorming on the history of the DC world (more below), and came up with a rough map of the USA. Um, in short, it looks awesome. So hooray let me post that! (Thanks to Google Maps for the basic image of the USA) 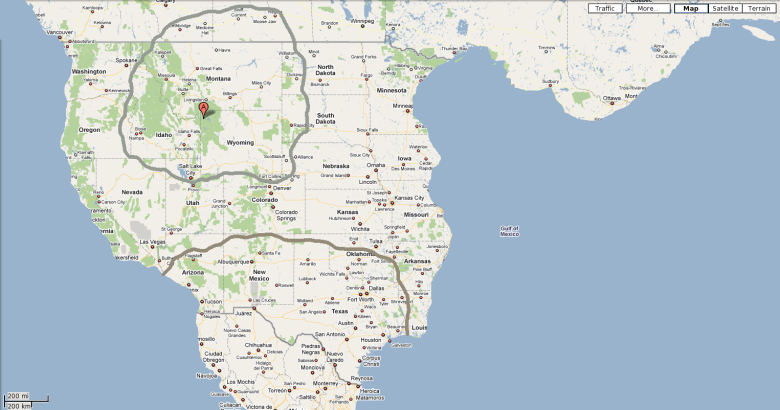 Now, how exactly am I going to make Dinosaur Cowboys relatively believable? Sure I could just say “A volcano erupted long ago, somehow we ended up with dinosaurs!”, ala the Mad Max approach of “Two great ‘tribes’ nuked the hell out of each other…begin movie!”. But I find a semi-realistic scenario, or just a slightly tweaked real world danger, makes for more believable play. It’s like how most fantasy games are still based in reality, so you don’t have to relearn what gravity is, ya know? Ah the joys of designing games.

The most plausible idea involves the active volcano that vents out via Old Faithful geyser in north-eastern Wyoming. When a supervolcano erupts the most likely outcome is a ton of dust being thrown into the air, giving you a “volcanic winter” (similar to the hypothesized “nuclear winter” from a big enough bomb). But! The other option is a stew of gases spills out and creates a “runaway greenhouse effect”. Ding ding ding we have a winner!

Okay, so the supervolcano erupts (called Eruption Day) in the year 2037. But there is only a thin layer of lava that ACTUALLY causes the eruption. Dust is thrown into the air, but not a ton, and mostly gasses are released. The temperature of the Earth heats up as a result, which causes the ice caps to melt and water to spill into the US. As you can see from the map, everything east of the Mississippi River is basically underwater. The west coast gets hit, but not as hard. The rising temperature makes everything a desert, more or less. South of the brown line is basically unlivable, with Mexico and beyond too hot to stand. Right near the line (ie: southern Arizona, etc.) is hot, but not lethally so.

Now, for the dinosaur part. The big caldera (basically dent in the ground…PS Man do I ever link to Wikipedia a lot!) that makes up Yellowstone Park hints at a previous eruption. Calderas are formed when the volcanic chambers empty out, leaving a big open air room, which then collapses from the weight of the crust and turf above it.

But what if it didn’t collapse, and what if some dinosaurs and seeds found their way into the chamber? Then a thin layer of lava flowed over top of the room, cooling and reforming slowly to make the current surface of the Earth. The next time the volcano erupts it only spits out this thin layer of lava, but also cracks and explodes the top of the empty chamber outwards.

The result is stored seeds and plant life are thrown around along with the dirt, which lands in a big radius relatively equivalent to the greenish circle on the map. The dinosaurs emerge from the chamber and by the time mankind goes to explore the wreckage they find the beasts. Naturally everyone was gravitating towards the vegetation and milder, tropical temperatures. So with the resources of dinosaurs and vegetation, the center around the empty volcano becomes the Neotechnoist civilization, while the rough desert outskirts becomes Duster territory.

Flaws with this idea? How did the plants survive underground without sunlight is the main one. I can visualize the chamber as sort of a mini-ecosystem that is self contained and fully supportive of dinosaur life. Then humanity is trying to recover for so long that they don’t have a chance to go back to the volcano for a while, and by the time they do dinosaur life has been established. The dinosaurs eventually roam away from the volcano to try to escape the encroachment of humanity, so then the whole US ends up populated by them.

Seems all believable(ish), considering the starting year is sometime around 2285, so there would be time for vegetation to grow and generations of humans to pass.

The game isn’t meant to be post apocalyptic, so the cities around the volcano will still be advanced and as modern as now. Electricity will be common (from an effort of the Neotechnoists to bring the light of modern living to the “savage” outskirts), etc. Life will be tough, as it was in the bread bowl of the US during the “Wild West” years, but not as apocalyptic as people desperately searching stores for canned food while fighting off roving gangs. It’s a fine line to walk, but I think it will be possible based on the quests and enemies I throw the characters against.

There are plenty of options for exploration and variety. The burning hot southern desert, said to contain untouched riches of the Old World. The submerged cities to the east, ripe for the picking by also naturally dangerous. The main story will still be in the area surrounding the volcano / jungle.

Psyched though! I’ll just have to refine, or blur (from the passage of time) the history of DC a bit, but the whole focus on Yellowstone and the ecosystem chamber seem cool enough to work. Yep yep!