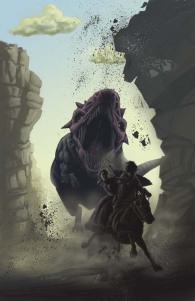 So apparently the above was the cover image for “Tyrannosaurus West”. Image credit goes to Chris Moreno. Apparently this was a comic from a company called Silent Devil aimed for release in 2006. But besides that scrap of information I can’t find much else, including any details of the comic issue or other images. So maybe it was just a pipe dream that ran out of money. If anyone knows or finds anything out about this comic please leave a comment here as I’m interested to see more of the actual issue. But for now we’re left with a really neato looking image that captures the panic and fear a person fighting a prehistoric titan would feel.

UPDATE: According to a comment by Chris on the original art site the comic never got passed the development stages. I guess that explains why I haven’t been able to find the actual issue. Well, at least we have the cool title page to look at!