Problem with the Bravery stat 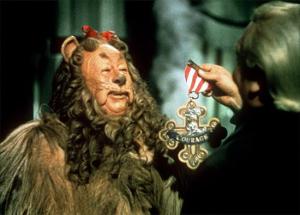 The picture to the right is about Courage, but I figured it fit well enough for Bravery. In Dinosaur Cowboys the Bravery stat is used to see if a character will run away after having overwhelming damage dealt to them. Sounds great right? Higher is obviously better. The downside is…dun dun dun…rolling LOW on the Bravery Test is the way to pass it. So if you roll a 12 you actually fail and run away for your next activation.

Originally in 2010 (has it really been that long?!) I had this mechanic as a “Fear Test”, and each character had a Fear stat. Then the idea was rolling >= Fear resulted in a failure, although it should have been >= success. Back then having a higher Fear stat was better (should have been lower). Obviously in the old implementation (of high = fail) Fear didn’t make sense, so I changed it to Bravery. The downside of high stat = better means low roll = better. I’d rather have a high roll be better, like for RMC and MMC, with the downside being you want a lower stat for it. I was able to get around this for those two by having “Miss Chance” in the name. Fear worked okay as a stat, but it felt more like a condition than a built in facet of a character.

Currently this is the only roll in the whole game where lower is better (even including Charge distance, healing, everything). So I’d really like to get it changed. But that means figuring out a good stat name that conveys lower = better, sounds good in a sentence (“Now take your XYZ Test”).

So basically the ideal would be:
Fear Test: Roll 1D12, >= Fear is a success. Lower Fear is better

But I don’t like Fear as the stat, so I’ve been trying to think of some better alternatives. Here are some ideas:

So far I think I like Faint, Gutless, and maybe Cowardicy (although that doesn’t exactly roll off the tongue). Hmm.

Exhaustion, Weariness, Fear, Scared, Fright, and Terror all seem like conditions that would grow over time during a battle, as compared to an inborn stat.

Scare and Spineless are good, and sound okay in a sentence, but I’m not sold on them.

Craven is cool but is more of an insult than a stat.

So anyways, I know I didn’t plan on making any big changes after v1.0, but this is an annoying enough issue that I’d like to change it. The only other larger change I’d want to make is figuring out a way to remove the custom non-D12 dice from Dinosaur Panic Movement, while still keeping the underlying feeling.

3 Responses to “Problem with the Bravery stat”