Apologies for the gap between the last report and this one. We finished the Battle to Seattle campaign, and then I sort of just took a break from all things Dinosaur Cowboys. But I’m back now and will be uploading the rest of the reports today (with the retroactive dates correct).

Anyway this week had split locations of Dunes Park (which the New Haven Vigilantes went to) and Warm Springs Indian Reserve (which Dustin Tails and Dustbowl Dusters would be at).

Unfortunately I didn’t get any pictures of Warm Springs, but I basically setup a ruined town with a road running through it. The posses had their leaders start in a bar, have a couple turns of bar fighting (complete with broken bottles and bar stools), and then the fight spilled out into the street. The fun part was we did a “Scattered” deployment (to represent all the different members wandering around the town). Combined with the dense terrain and simple objective (“Shoot Out”, aka kill everyone) made for an interesting game. Eventually the Dustin Tails posse was victorious.

On the other table at Dunes Park the New Haven Vigilantes got to fight a “boss monster”, aka a giant alligator toy I bought from a craft store a few days before the game. I wrote up some custom rules for the Giant Alligator, including a ton of different special attacks and abilities (like “Tail Swipe”, “Acid Breath”, etc.). Another fun ability was that the alligator could send out the young (modeled on the back of the toy) like “missiles”, that would seek out and bite targets. In addition the alligator could swallow targets, and then the victim would have to fight their way free from inside the alligator (which was mapped out using a square grid, haha). The alligator had a ton of Hitpoints, and also had “directional” Defense so that hitting from the front was harder than shooting the alligator in the side or back. The alligator was also so huge that it would crash through terrain as it moved, meaning trees and other vegetation it passed over was removed.
You can download the single page rules for the Giant Alligator here: Giant Alligator rules PDF.

The game ended up fairly thematic with the New Haven Vigilantes pouring fire into the alligator for many desperate turns. A doctor in a nearby cabin would revive any fallen posse members, so they had a few “waves” of humans to throw against the alligator. Eventually the posse were able to wear down the alligator and kill it. 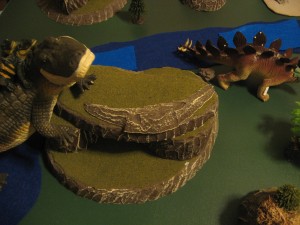