Blurry and dark pictures of my miniatures collection!

Straight from the cabinet, here’s my miniature collection from the past, well, probably 15-17 years:

The top shelf is pretty much entirely fantasy minis from my years playing Horizon (my own game), Advanced Heroquest, Mordheim, and more recently D&D (the majority of the front row were painted in the last ~3 years when I was going to D&D Encounters at my local shop. For example the purple and green Mordheim cultist was a Binder. The pirate looking guy with the red scarf was a ranged Thief. The big red Minotaur was a Battlemind I think…some kind of psionic guy regardless). Also I loved little goblin figures growing up so I have a wide variety of those. So much character and zaniness in those early GW sculpts. Anyway some of these actually made appearances in Dinosaur Cowboys battle reports, such as the repeat usage of the far front, far left Dark Sun Mul as some kind of axe wielding Savage.

The second shelf is a mix of minis. The back half are most of my Warhammer 40,000 Chaos army from way, way back (back when Plague Marines were 5 single pose plastics in a box). They at least have a consistent color scheme. I get a bit bored of painting the same color scheme so the rest of the army isn’t done. The front few rows are pretty much all my modern Dinosaur Cowboys and single figure sci-fi stuff. The missing spots are actually from the new guys I recently painted.

The third shelf is some more Warhammer 40,000 stuff (Sisters of Battle…as far as I know these metal minis are still the army line used today). The back are a bunch of Battletech mechs, which I love the design of. So many ugly-yet-cool Mechs. I went for a consistent paint scheme for some of them, so the orange guys were called “The Triad of the Sun”. Of course there are some one-off paint jobs too, like the little lime green Locust I called the Limefly (I think it could run 30 squares?), the giant war torn Atlas, the maroon-and-ivory Lao Hu, etc.
And then the front row are my Silent Death ships, which I love because I chose a fun paint scheme for each one. These are also probably in the last ~3 or 4 years. You can see an X-Wing style scheme, one that looks like an eagle, another painted with tiger stripes, etc. I did consistent bases so they actually tie together quite well.

The fourth shelf is more or less a grab bag of less well painted stuff. The bulk of the shelf is my Warhammer 40,000 Eldar army (I use the term “army” loosely, they could be ~1500 points in 2nd edition, whereas in the current edition I doubt they’d break 1k). There are a few more Mechs, some Ebayed Skaven, an AWESOME mounted knight on a griffin figure (I’m so proud of the wing paint job, it looks really realistic up close), even some little 15mm Epic 40,000 stands of Space Marines that I used as Battletech infantry (thus the matching Triad of the Sun color scheme). You can see a squadron of Imperial Guard troopers are well, a few of which have made appearances in Dinosaur Cowboys battle reports. 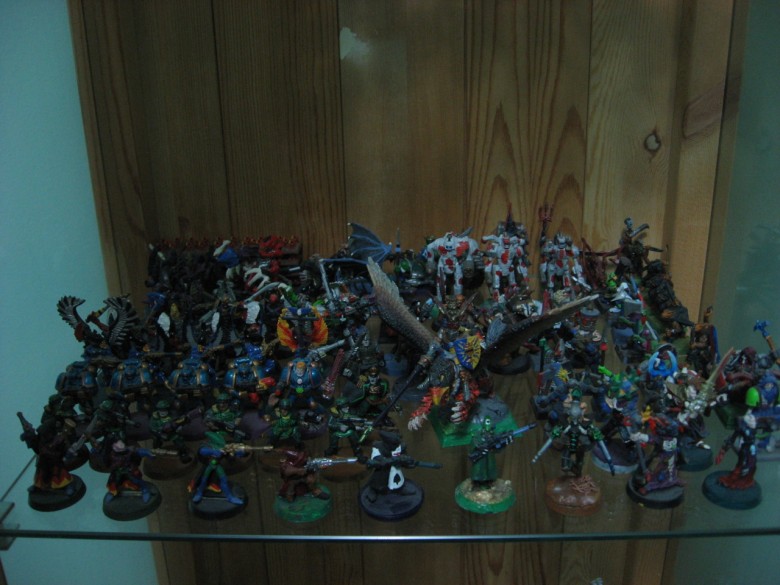 The bottom shelf is unpainted stuff that I want to get to eventually (as compared to a shoebox elsewhere that has stuff I’ll probably never get to, but makes for easy demo figures if friends or family want to paint something). I didn’t bother taking a picture of that, but there’s a good mix of cool minis that I’ll hopefully get to before I die of old age.

If you want a less dark and less blurry picture here is my easy solution: camera flash! Now it’s washed out and full of glare, but you can at least see the minis better. This is just of the shelf important to Dinosaur Cowboys, since it has the full array of modern/sci-fi people. 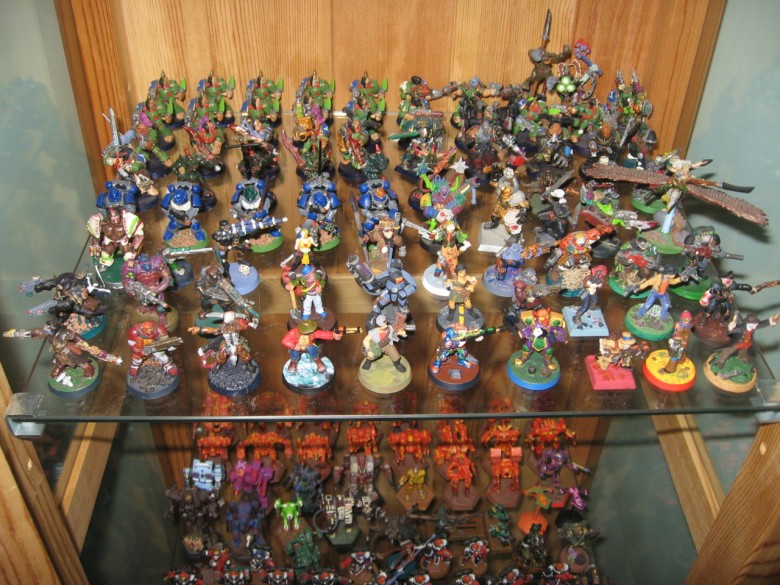 Also yes, the walls of my office are “hospital green”. Love that color!