I’ve been making v2.6 changes all day, mostly around Traits (which tediously require updating the Trait document, re-pasting it into the core rulebook, then updating and testing the Saloon list, then updating the Quickdraw rules, and updating existing posses including the example ones – what a horrible process but I don’t know how to improve it). So with that said I won’t have a ton of energy to post as many details of my most recent playtest. The game itself was enjoyable, and I think the pictures turned out well. Amazing what a different and unique table setup can do for fun.

Overview
I created two posses that utilize a lot of new features and weapons fresh in v2.6. The terrain setup I used represented an old crater that had filled in with lush jungle. I envisioned some of the trees having a tough wood (that is actually used for Wood Armor) that happens to be poisonous to dinosaurs. Two gangs are contracted by opposite firms to purge out the “bad seeds”. So in other words 5 tree markers and the Demolish objective (with a slight twist of no attacks on the trees from further than 6″, reasoned as the thick bark). The objective factored very little into the game itself though. Otherwise I used a Corner deployment. No turn limit, and the match ended up going to 9 turns as a result.

Posses
Here are the two posses. Don’t worry about the IP/ND not being even, I went for flavor and added things I wouldn’t normally (like one person carrying FOUR types of grenades). 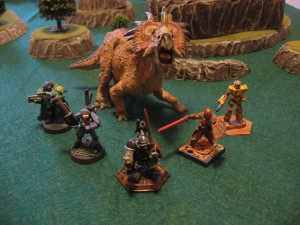 Lots of exciting features here. The leader (General William) is built for charging while mounted, pure and simple. Charger trait, Onslaught, and a top tier Plasma Lance. Lovely. Malius Blaze would test out the improved flamethrower weapons, specifically the Badlands Burner. Tom West was a Boxer, which meant his fists were lethal weapons capable of 2A-8D. The mini I used is an old D&D guy, the iconic representation of the 3.0 Fighter. I’d love to get a bare knuckle boxer type mini, if I could find one that isn’t some goofball straight from the ring. I guess I could just file/cut weapons off someone. Bellgloan was pretty basic, just testing the interaction of the high attack Klondike 7000 (or ‘K7K’) with the classic Rapid Fire and Go For the Eyes traits. Unit 4-15-3 has a special place in my heart (and not just because that was the name of my Doctor character in my recent Edge of the Empire campaign). I mentioned way, way back that I really like medics and support characters, so Unit 4-15-3 exemplifies this within the current rules. Quick Hands for an easy heal, Doctor because it’s one of the best designed passive traits, and Get Up for some remote healing. Then a SLEW of IRPs, just a ton. He will also test the Pushed capabilities of the Lewis Airgun. Dinosaur is pretty simple, except I’d be using the smaller Horned model I have for a change of pace. 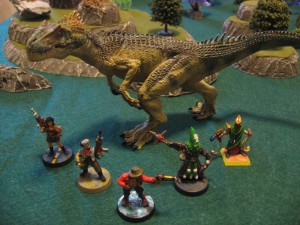 Lots more to test with these guys. The leader is taking out The Tombstone for a spin, so who knows how that’ll work. The idea is to use it with Clean Shot for a massive attack (basically 1A-11D with Armor Piercing). He also took one of my favorite named guns the O’Sullivan Sixer, the top tier Six-Shooter. Madhat was purely a grenade man and demolitions expert. With the Thrower traits he could reach 21″ with a Bundle of Dynamite…some arm on him! Glargamar would ride the dinosaur most likely and try to Pull targets in with the Dinocatcher. Iara was a pretty standard sniper with a focus on testing the higher end Frontier Twin Rifle and various traits. Corporal Luke Mossly was a similar support character to Unit 4-15-3 but he went with the unique approach of the Motivate weapons and the Lend a Hand trait. And the dinosaur is a T-Rex named Tiny, so that I have an excused to use the Allosaurus model (since I’ve been overusing my Papo T-Rex I feel).

Early Moves
With a lengthier game like this I can’t recall the exact turn by turn details, and I barely took any notes. I’ll highlight some unique or especially exciting parts though. Otherwise just enjoy the pictures! 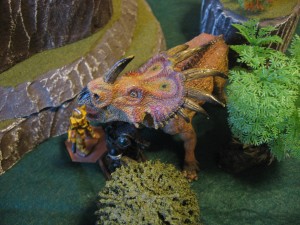 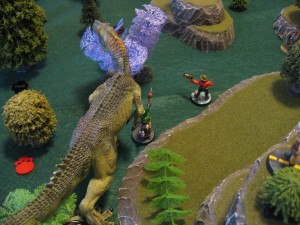 Awesome moment pictured below where Madhat put his super long range Bundle of Dynamite to good use. Everyone had just dismounted from the Horned dinosaur and spread out. Unfortunately they didn’t have much beyond a 3″ to 4″ movement, so they were quite clustered. Which meant Madhat could hit the dinosaur AND get the 4″ Explosion effect on everyone. In other words four targets for the price of one. I thought the game was gonna be over so quickly after this happened. 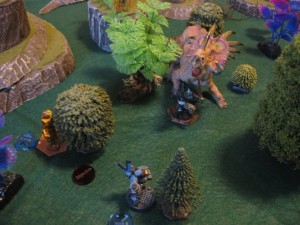 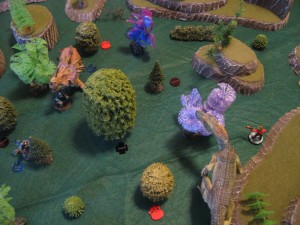 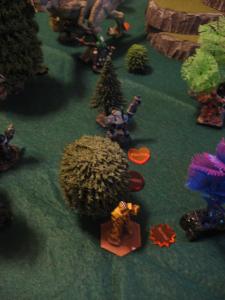 Nice usage of the Klondike 7000 pictured below. Bellgloan used his traits Rapid Fire (+2 Attacks) and Go For the Eyes (Crit on 10+) for a total of 9A-1D. But his roll was awesome and ended up doing 11 damage. So many bonus Criticals from the trait.

Blood Around the Big Tree
General William got his chance to fulfill his purpose of Charging (pictured below). While mounted on the Horned dinosaur he reached Glargamar (who was also mounted) with a big Charge right by the central tree. With the usage of Onslaught (+4 Attacks on Charge) and his great Plasma Lance (+1 Attack and +1 Damage on Charge) meant he was hitting for 7A-9D. You can imagine how Glargamar felt as he got one-shot killed.

Also Unit 4-15-3 got to really shine, even though he had been Stunned thanks to a long distance Dustbomb from Madhat (you can see the marker in the pictures below). The backline of General William’s posse wasn’t looking so great, but the doc turned it around. He used Get Up! (which doesn’t require an action, so he could do that while Stunned) to fix up the nearby Malius Blaze. Then he used Quick Hands on himself, which also got around the Stunned, and with the help of his Lifesaving IRP healed from 3 HP back to full. 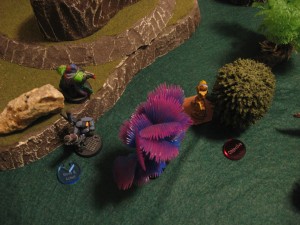 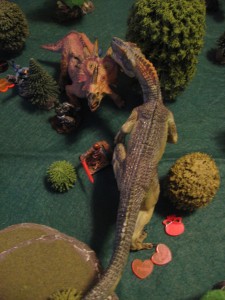 The Lines Push
General Williams did an awesome move forward to get into melee with the clumped backline of Le’Dorf’s Royal Force. Time to Whirlwind…oh yes, what a time it was. He did take a Snap Attack from the King dinosaur, but the trade off was worth it (T-Rex missed anyway). Also Tom West basically punched a T-Rex over and over in a glorious display of martial prowess. Eventually he’d lose the combat, thanks to supporting fire outside the combat (plus a lot of healing of the T-Rex, including a full stage two Get Up!), but it was still an impressive fight. 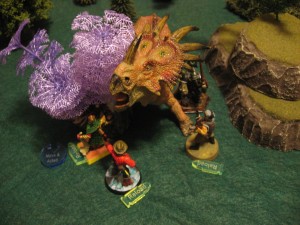 At this point the dinosaurs had basically pushed through to the opposite deployment zone. So all the “squishy” shooters in the back were suddenly panicking. One of the funner dinosaur usages I’ve seen in a while. 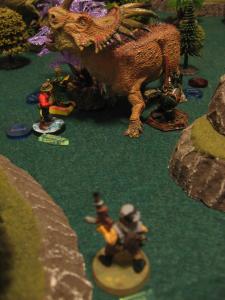 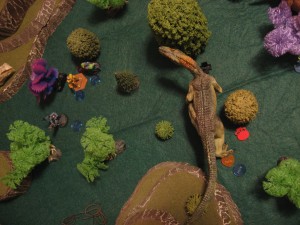 Scramble to Survive
Hilariously enough on Turn 7 the leader Richard Le’Dorf actually got to use Clean Shot (normally it’s an early game opener) because the enemy doctor Unit 4-15-3 had healed himself back up to full. Also Madhat had basically burned himself out of grenades at this point, with nearly everything needing a Reload. 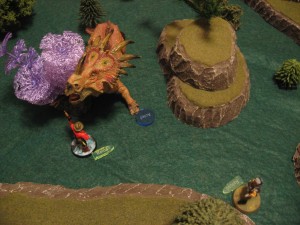 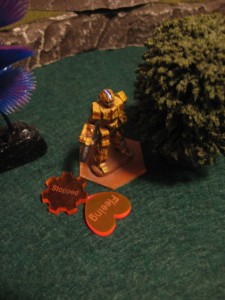 Last Breaths
By this point Le’Dorf Royal Force consisted of Iara and Madhat, or who I commonly refer to as Trista and Khulan. These minis date WAY back to the original Dinosaur Cowboys skirmish tests, like 4 years ago. From the Bounty at Caldwell Lake you can see them fighting together, so it’s neat to have them trying to survive back to back now.
The picture below with the orange D6 rolling a 1 was for the Charge from the Horned dinosaur, which would have wrecked house. The Le’Dorf posse were definitely on their back foot, especially since Madhat had minimum ranges enough that he’d have to resort to unskilled Brawl attacks in melee. So the failed Charge really helped the situation.
Unit 4-15-3 was sustaining himself very well, and actually managed a pretty neat kill. He took a far shot at Iara, who had risked the Snap Attack to leave combat with the Horned dinosaur. Unit 4-15-3 hit on a roll of 12, and left Iara with 1 HP. But the weapon used was the new Lewis Airgun, so the 4″ Pushed actually sent her back into the impassable Horned dinosaur, which triggered the “Push Damage” rule, and she died from that! Basically she splattered against a dinosaur.

What Did We Learn?
A few things, actually. Doctors are awesome, that’s for sure. I mentioned above the “Doctor” passive trait is one of the better designed ones. The reason I said that is because it’s very powerful but also very situational. It can be completely useless or completely game changing, depending on player skill and strategy. It also helps develop and utilize a more niche aspect of the game (some posses don’t even bother with healing). And it also takes some Neodollar investment to work well. But yeah, lots of fun having a “healer” on the battlefield to sustain everyone.
I also realized it’s time to bite the bullet and rename a lot of the Traits. As I look over the (somewhat overly long) list I notice some duplication. Why are Berserker and Rapid Fire a separate trait, when they both give +2 Attacks (just to different weapon types)? There is some attempt at consistency with Traits named “XYZ Shot”, like Knee Shot, Coward Shot, etc. But what I did now is renamed these to an ACTUALLY consistent “Attack – XYZ”, like Attack – Coward, Attack – Inspire, etc.
Balance seems good, and the new weapons are spot on. I tweaked Motivate a bit so you can heal other allies as well as yourself, to really fit the theme. I added a medium range to Lever-Actions to support their 1 Attack. Just minor stuff like that.

So at this point v2.6 is 95% ready to go. I need to do a final readthrough and edit, otherwise it’s just releasing it, updating the Saloon (and posses), posting info to Boardgamegeek, etc. I might get one or two more playtests in (not sure if I’ll record them here), but like I said before look for the rules before the end of April. Maybe a release next week (from the time of this post) in fact!

After that I want to do a battle report featuring my new painted Mad Max style figure, as well as a gas station, Exxon signs, and a propane tank. So that should be pure fun.