I have a terrific fan battle report here from Ross on the Post Apocalyptic Wargames Forum. He has a ton of awesome ruined terrain which I showed a bit of before. Anyways on to his writeup and pictures of “Keep to the Left”:


The Claynation Syndicate (me) – Jefferson, Eustas, Toppy, Megs, in front of Fluffy

Lords of the Wasteland (her) – George, Frances, Buckley, Don, in front of Spot

The Lords of the Wasteland call out to the Claynation Syndicate, telling them to get off the road.

The Syndicate’s response is in the negative and contained words not repeatable here. 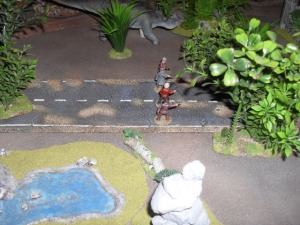 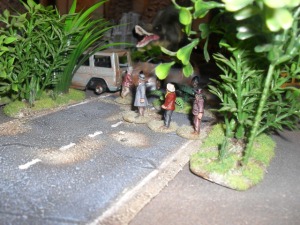 The Lords break formation and approach, Spot rushes towards Fluffy intent on a big meal!

Spot charges in taking a big chunk from Fluffy. From cover of ruined and rusted cars Megs unloads his shotgun critically hitting the T-Rex for 15pts of damage.
George shoots at long range and misses while Frances criticaly hits Toppy for a whole 2pts of damage!
Fluffy bumps Spot for 6pts of damage.

Fluffy and Spot score wounds on each other while Megs unloads his shotgun into Spot, again criticaly hitting it, this time finishing it off!!
Frances barely scratches Fluffy while Eustas steps forward Fanning the Hammer killing Frances. Beside him Jefferson Fans the Hammer at Don only clipping him for minimum damage. Toppy makes the trio of Syndicate men but only fires normaly at Don, clipping him once and jamming his weapon in the process.
The leader of the Lords steps in with murderous intentions Fanning the Hammer critically hitting and killing Toppy. 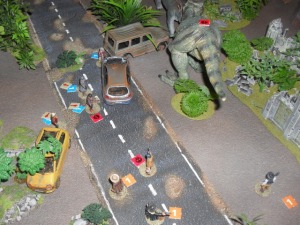 Buckley shoots at Fluffy at long range but can’t get past the wounded dino’s armour.
Megs pegs George for 10pts of damage causing him to break while Don Fans the Hammer at Eustas missing. The others hop from foot to foot busily reloading.

Fluffy charges Buckley, Buckley receives 6pts of damage from the Onslaught.
Smuggly, Megs walks upto Don, and from point blank range… misses! Calmly standing there amid the hail of bullets, Don Fans the Hammer at Megs blowing him away. Jefferson walks forward Fanning the Hammer shooting George in the back taking him out.
Eustas wildliy Fans the Hammer at Don for a small amount of damage. 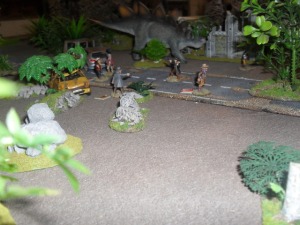 Buckley fires at Fluffy but just jams his gun as Fluffy bounds forward again to minimumly wound Buckley.
The other all hastily reload their weapons.

Jefferson activates first, shooting and killing Don.
In an act of defiance, Buckley punches Fluffy in the nose critically hitting for 2pts of damage.
Stunned by the hit on the nose Fluffy manages to miss with his attackes.
From the side, Eustas picks off Buckley finishing the fight. 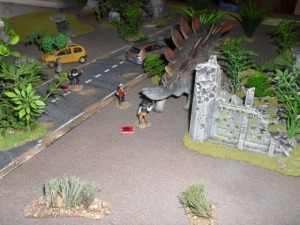 Many thanks to Ross for trying the game out. He had two questions afterwards that I thought I’d re-post here:

Q: With the Move RMC penaltity, does the model count as having moved if its movement was the last round or the current round?
A: The Move RMC penalty should only apply in the CURRENT turn. The idea was it forces a person to choose their Activations wisely, since you can “get the drop” on a tough target and Activate before it moves and have an easier time hitting it.

Q: Charging, is the charge range 1d6″ or Movement + 1d6″?
A: For Charging you can perform a normal Move in your Movement Phase, then the Charge itself in the Action Phase. The Charge is just D6″, so you were playing it correctly. Remember you can only Charge from 2-6″ away, so it’s meant to be a gamble and tradeoff of risking not reaching combat or getting the bonus Attack.