Update Oct 29 – This game has been released

While perusing various video game sites I came across Primal Carnage, an upcoming (Fall release date) multiplayer FPS game involving humans vs dinosaurs. They title it as an “indie” game but in this case I think that’s a cover to produce a lower quality project…hopefully not though. The human classes seem sort of like a mirror of the popular Team Fortress 2 game, which is a bit of a pity. I’m probably just being negative and pessimistic.

The upside is the game looks good visually and could be simple fun. Sort of like Jurassic Park if the crew had started fighting back. The screenshot page on the Steam site looks like some neat ideas such as net launchers. I’ll have to wait and see what the gameplay looks like as it gets closer to the release date. But hey, at least dinosaurs are getting some more attention, since as they say on the website “Primal Carnage is one of the few games based around Dinosaurs.” Too true, too true.

I think part of the issue is these developers keep doing dinosaurs vs humans, instead of humans + dinosaurs vs humans + dinosaurs, which I think would be better and more interesting (maybe because that’s the type of game Dinosaur Cowboys is). Otherwise you end up in a situation where you’re on the human team and you just want to play a dinosaur, or you’re stuck with limited strategies because everyone on your team is melee based. I think Dino D-Day was one of the better approaches to this since at least the dinosaurs did something more than just charging forward blindly. Plus these games tend to put dinosaurs in the spotlight…which makes sense in a way, but at the same time I find dinosaurs do better as supporting characters and background pieces compared to the focal point. What I mean is if the human vs human aspect (without any dinosaurs) is boring, adding dinosaurs won’t suddenly turn a bad game into a good one.

And since everyone loves pretty pictures: 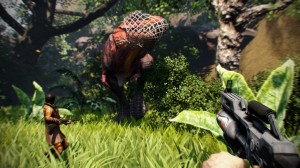