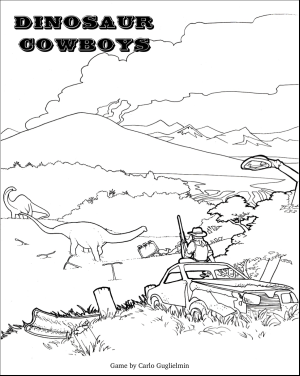 It’s with great joy that I announce version 2.0 of Dinosaur Cowboys! After nearly two years of changes, tweaks, and edits, I feel that this version is finally done and polished enough to replace the old v1.0. I’m going to the v2.0 line because there have been enough core changes to the rules (which I sheepishly remember saying I’d never do). You can see a general idea of the biggest changes from the v1.9 release notes. Anyone who has been following the bleeding edge version knows pretty well what v2.0 has shaped up to be.

I think the rules are absolutely great at this point. I have numerous playtests under my belt, I’ve encountered and fixed/clarified a lot of corner cases that really only come up during repeated play, and most of all I’ve created the type of game I enjoy playing!
I’ll keep my eye on rule tweaks and fixes as I go, and I do want to reformat the rulebook to two columns at some point, but otherwise I don’t foresee any large changes. Then again I said the same thing for v1.0, so who knows! I do have a few ideas of “expansions” to the rules (like an armor system for Dinosaurs) but those would all be separate documents.
You can expect to see lots more campaign reports and general matches, since like I said I really enjoy actually sitting down to play the game.

Version 2.0 Changes
Anyway here is a list of the minor tweaks since v1.9 that I’ve added to really solidify and give a fresh face to v2.0:
– Added two new Deployments: “Layered” and “Delayed”
– Added 5 new art pieces, replaced 2 pieces
– Added ‘spohniscool’ Xenozoic Landscapes as title page (link)
– Reworked the version, licensing, and credit information into a table
– Renamed ‘Range’ to ‘Distance’ for how far weapons can attack, to avoid confusion with RTN and the entire term “range weapon”
– Change Defoliant Grenade from $200 to $100
– Updated trait text for consistently with other traits and with the latest rules
– Noted to measure from the attacker’s base to the closest point on the enemy, to prevent measuring to the back of a dinosaur to avoid Minimum Range
– Noted who to Flee from if multiple enemies are the same distance away (ie: no “nearest”)
– Increased playtime recommendation from 30-60 to 45-60 minutes
– Noted playtime increases with more players
– Moved “firing in close combat” to the bottom of the section, since text involving range attacks shouldn’t be the first item in the melee section
– Also said firing into close combat replaces ANY Distance modifier instead of specifically Short, since shooting into melee could be done from further away
– Noted that the enemy that took a dinosaur out of action places the passengers, instead of the generic “enemy” which could cause confusion in multiplayer games
– Saloon: Made the Load table view scrollable based on the browser size
– Saloon: Added title mouseovers to weapon special abilities in the store view
– Saloon: Added an option to Sell an item instead of Remove it. Sell gives half refund, and is meant for ongoing campaigns
– Saloon: Updated trait text to match the latest text
– Saloon: Added option to sell a Dinosaur for a half refund, instead of Remove for full
– Saloon: Fixed removing a member to properly include hiring cost in the ND amount listed in the status

Enjoy! And of course feedback is always welcome.

Reflecting
I always think taking a breather and reflecting is a good idea at any milestone in the development process. In the case of v2.0 I can look at a game that “feels” like something I wrote, while at the same time be continuously pleasantly surprised by how well it plays. I’ve sunk numerous hours into the game, between original brainstorming right up to modern day campaigns (and the tedious formatting of battle reports that goes with it). I think if I was more of an entrepreneur I’d make an effort to get the game on Kickstarter (especially now that it came to Canada). But so far I haven’t gone that route, and I’ve been quite content to keep the rules free. In some ways I think that rules should always be free, although I know if that was the case the wargaming and RPG industries wouldn’t be where they are today.
And speaking of the rules, I thought I’d mention a few of my favorites from v2.0 (although a lot of these go way back):

All in all I’ve been very happy with what Dinosaur Cowboys has grown to. And like I have recently been saying, Dinosaur Cowboys is something I really want to play, instead of sort of feel obligated to play (like some of my older games). Tweaking and poking a game for 5 years (seems so long!) has been really nice and a good way to exercise my brain and keep those development muscles strong.