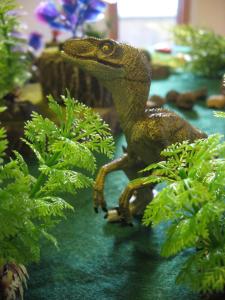 Well after close to 5 months I’m finally back with a new battle report from my Windy River test campaign. As I mentioned before I’m pretty much just playing this campaign for fun now and not so much for testing. The injury tables seem good and I haven’t run into any major issues with all the stat changes and rulebook updates.

In case you forgot, the Drylands Expedition had just rescued Cecilia at the request of her husband Gordon Glenbrook. At the end of that encounter the posse had returned to Watterson from Matron’s Den, not found much else happening in the town, and decided to scout out the Hyran Mine to the north-east. I had left the last session having travelled for Day 5 and 6 to reach the Mine, but I didn’t roll for random encounters. Well I got one on Day 5, so I wrote up a posse to pit the Drylands Expedition against and had at it! This simpler random encounter helped ease me back into Dinosaur Cowboys. As with the last session I focused on playing the game instead of taking detailed notes, but I did still get a bunch of pictures.

As you might have read I’m in my new house now so this was the first Dinosaur Cowboys game in my new games room. From the pictures you can still just see my old kitchen table, but trust me it’s nice to have a dedicated gaming space! 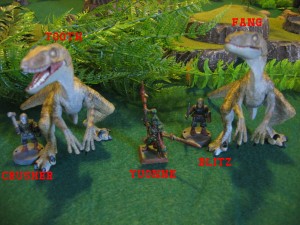 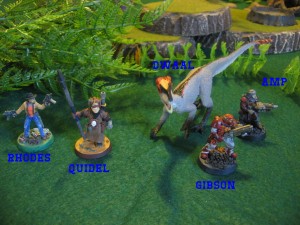 The Drylands Expedition have slowly been improving and are up to 137 IP, 1520 ND, and 4 Traits when they fought this encounter. Pretty snazzy. Amparo was “Feeling Weak” from his Wound before, so he’d be at -1 HP. On the upside Amparo’s previous “Broken Elbow” had healed up so he could get Critical Hits again. Dwaal had a “Soft Spot” which was -1 DEF, but he already had 0 DEF so no change there.
Anyway here is the PDF roster for Drylands Expedition that was used for this game.

Opposing them were “Tooth and Fang”, a ragtag group of roving Savages (classic random encounter material). I figured they could be escaped slaves from Hyran Mine, or perhaps disposed family members waiting to strike at the Mine itself. I broke the rules a biiiiiit for this posse by including, for the first time ever in print, two Raptor dinosaurs in the same posse! Pretty exciting. So the PDF roster doesn’t have the second dinosaur included, but you can see there are 400 ND to spare to buy it. So I just wrote in “Fang” as the second dinosaur on the roster before the game.
In general the posse is fully melee focused. Crusher and Blitz mount the dinosaurs and ride into combat, trying to use their Lassos to close and then dishing out big damage with their solid melee weapons. Lots of Defense and Hitpoints to go around, so hopefully they could make it across the field.
Here is the PDF roster for Tooth and Fang.

New Dice!
This was the first roll of my new Gamescience precision dice so I was excited to try them out. The idea is “normal” (ie: Chessex) dice are put in a rock tumbler to remove flash marks from the mould. This of course dulls the edges and corners, and introduces slight differences in how each individual dice will roll. Whereas the precision dice have sharp, crisp edges like casino dice, so they technically should roll more accurately. The downside is they come with the flash marks still on, so you have to manually cut or file the marks off (which I did). The round vs sharp edge is really noticeable when you compare the two types of dice though.
Plus let’s be honest, do I really need an excuse to get new dice?! They were an okay price and look neat and I was excited to try them out. 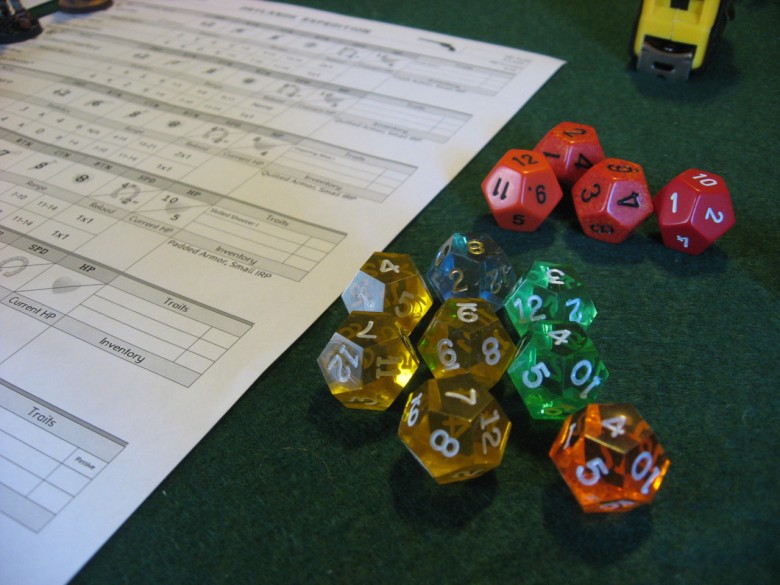 Table and Terrain
I didn’t use the full kitchen table in my setup since I keep the extender leaf in permanently. So I think the board was still close to 4’x3′. Maybe 3.5’x3′.

I really wanted to translate the campaign map to the table since I liked the look of the jungle and hills on the map. I imagined the Drylands Expedition slogging through thick undergrowth, up steep black hills, their feet tenderized from the cracked lava flows of old. Mosquitoes as big as a plate engulf them and the roars of distant dinosaurs echo over the broken canyons. 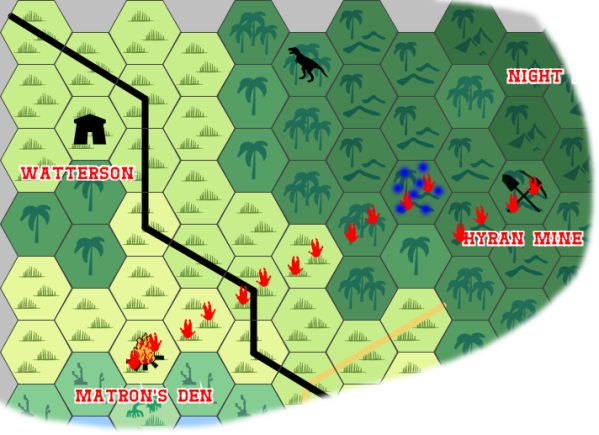 I put a bunch of deciduous looking trees on the south of the table, which would be the flatland jungle trees. Then the opposite edge is rife with thick jungle trees and the beginnings of dark hills and broken rock. 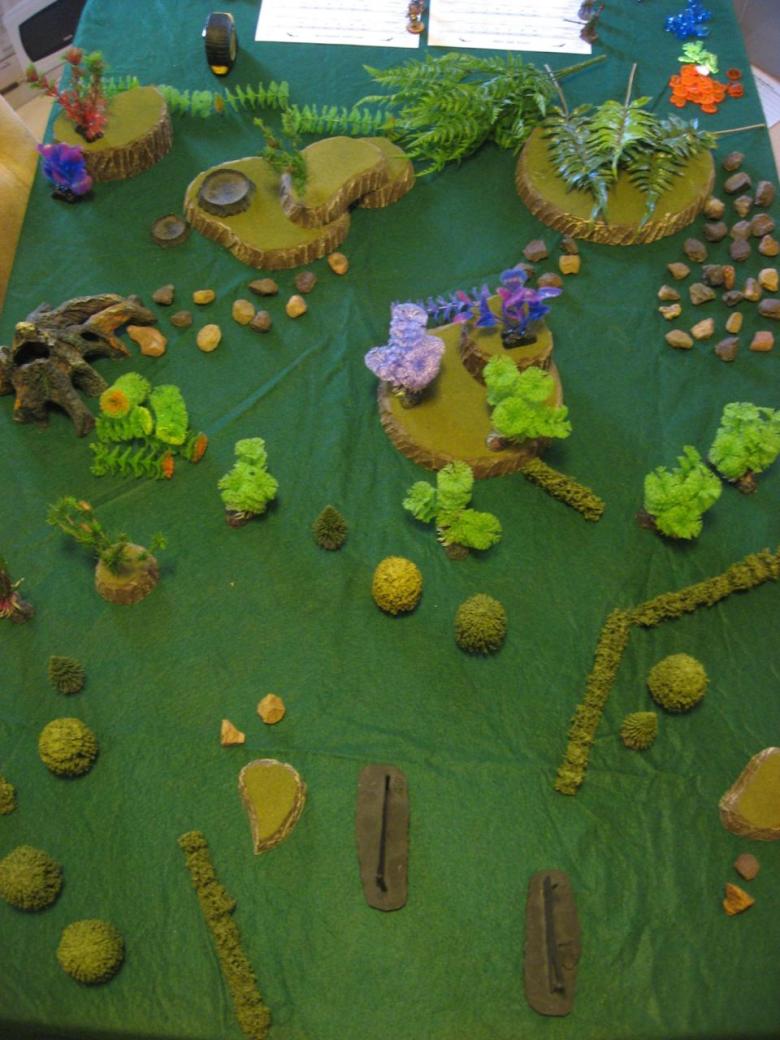 Deployment, Objective, Features, Variant Rules
Nothing too crazy this game. Just a standard “Edge” deployment (up to 8″ in) with the Drylands Expedition coming from the south and Tooth and Fang emerging from the north. I didn’t even use a fancy Objective, just a plain ol’ “Shoot Out”. No Features either (although I was tempted to have the volcanic rock piece actually be a Volcano feature!)
Remember that the Windy River campaign is using the “Last Man Standing” and “Dual Wield” Variant rules, because I like both of those and should consider moving them into core :)

Here are how the two posses deployed. Drylands Expedition recognized the melee focused nature of their opponents and went for a spread out approach to avoid having everyone stuck in hand to hand. Tooth and Fang kept both dinosaurs tight to the east flank, with Yuonne bringing up the west side.

Game Begins – The Early Rush
Dwaal took the lead for the Drylands Expedition by using his full 15″ Hustle. The idea was to use him as a meat shield and keep the enemy force distracted and occupied while the ranged elements of Drylands eviscerate the opponents. Yuonne moved forward to meet Dwaal in combat, eventually getting a charge and hitting for 10 damage (and adding some Panic)!

Second Wave Arrives
Crusher was the next one to enter combat, and before Quidel could cry out Dwaal was down to 1 HP! I found this rather funny since just last game the dinosaur had been trained to get +1 HP for $50. Who knew it’d make such a difference.
However Tooth and Fang took the worst of the exchange since Quidel, Gibson, and Rhodes could all pour fire indiscriminately into the melee. That’ll teach ’em for bringing a Spine Blade to a Six-Shooter fight!
Eventually Gibson brought down Yuonne with a lucky roll of his 200kW Six-Shooter. Already you could tell the game was turning against Tooth and Fang.

Fear rippled across the surviving Tooth and Fang members after their leader died. Both Crusher and Blitz failed their Bravery Test which is quite a setback when they needed to cover as much ground as possible.

Closing the Gap
On the east flank Blitz kept pushing Fang towards Amp and Rhodes. But the Raptor could only Hustle 9″ and both Drylands members easily outdistanced their enemy. Both riders and dinosaurs took heavy fire, with Tooth in the center being the focus for the west flank and Blitz on the east being the target over there.

Time to Reposition
In the interest of, well, staying alive, Dwaal moved as far as possible to the opposite corner of the table. Not like his 1 HP and feeble 2A-2D attack would do much at this point. Meanwhile Blitz and Fang closed on Amp, trying desperately to get into Lasso range so they could lock him down. In this case Blitz had a Wire Lasso with an 8″ range that would apply Stopped, which would set up Amp perfectly to get Charged. 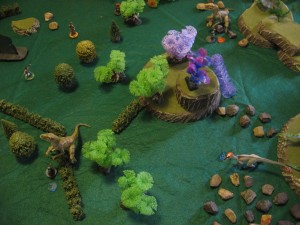 Unsaddled by Fire!
Finally Tooth succumbed to the volume of fire from Quidel, Gibson, and Rhodes. Between Gibson and Rhodes both using Fan the Hammer (for a massive 12 total attacks between them) to Quidel reliably throwing out 2A-4D hits, the Raptor just crumbled. Unfortunately the dinosaur was taken out after Crusher had Fled, so the rider was left quite far from the action. In the distance of the first picture you can see poor Crusher along amidst the rocks. The second picture is Rhodes complete disregard for ammunition conservation.

The Pain Continues
Fang was the next to fall. Blitz did eventually get a single Lasso attack against Amparo, but missed since he needed an 11 with all the mods. The constant 400kW Lever-Action shots from Amp added up and after the dinosaur was dead Blitz soon followed.
There was a single highlight for the poor Tooth and Fang posse: Crusher actually reached melee! He got a lucky 6″ Charge onto Gibson, which almost made up for two failed Charges by his friends earlier. The angry Savage hit Gibson for 5 damage with his Spine Blade, which took the man down to half his health. Still not enough to seriously hurt the Drylands Expedition. Crusher was killed by gunfire soon after. 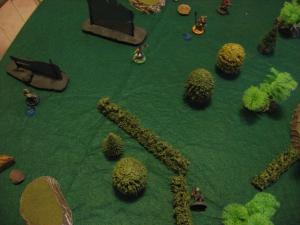 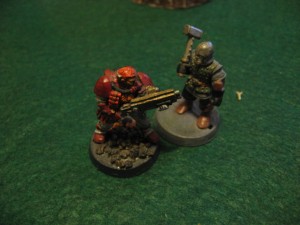 Thoughts on the Encounter
From the Drylands Expedition point of view: easy! Having Savages run directly into our (considerable) firepower was great. Killing the Leader and having the other two Flee was even more perfect. Dwaal worked well as a shock trooper distraction, and still managed to barely survive to the end. The one hit Crusher got in did sort of expose the fragility of some members, since Gibson’s 10 HP bled away quickly once he was in melee.
Regardless I think that the next posse encountered needs to be as versatile and ranged focused as the Drylands gang are. Which should work well since the enemy will probably be bandits around Hyran Mine, and you know those guys are full of traps and tricks!
As far as game balance pure range dominating pure melee is exactly what I want, so no complaints there. After all should the guy charging down the street with a knife really win against the guy with the shotgun?

Awesome art by 24KevinEnd of Encounter Process
Pretty simple process since no one was Taken Out of Action for the Drylands Expedition.

Amp and Dwaal both had their old Wounds heal up.

To be honest there aren’t any easy choices for what to buy or upgrade next. The posse are in quite good shape for weapons, with the next step being a bigger jump (like 400kW Lever-Action to 600kW) than the incremental upgrades so far. It’s actually too bad they don’t have $200 instead of $190 since a lot of equipment breakpoints (like high end Grenades) are $200. I guess I could sell some old gear at half price to make up the difference.
I think that Gibson could use a better weapon. Maybe a high attack rifle like the classic Light Repeater. Too bad I don’t have $600 spare for a Gatling Gun. Everyone else is fine for weapons and armor at the moment.
I’m also a bit stumped on how to spend the IP. I think a smattering of Hitpoints is a safe bet as the gang has fallen a bit behind with that. They were hitting pretty consistently so I think the RTN values are fine for the moment.

New Gear and Stats
I think I’ll sell Gibson’s Laserbow for a $40 refund, which gives me $230. Then I’ll buy him a Heavy Repeater for $150, leaving me $80. I’ll keep that in the bank to save up for some Grenades or a bigger rifle for Amp.

Currently The Saloon has a limitation where removing a weapon refunds it for full price, instead of selling it. So I’ll have to change that before I can get proper values.

Besides the equipment changes here is how the posse looks: Drylands Expedition (Saloon link).